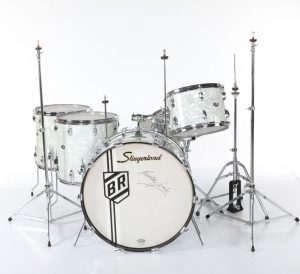 Buddy Rich’s drum kit, played from 1974 to 1977 on the Tonight Show, has surfaced. It’s in great condition, with the BR crest bass drum head signed by the man himself. This drum set has had a few different owners over the years, starting out in a Slingerland sales rep’s home after Buddy changed to Ludwig in 1977. This Slingerland rep has signed a note verifying its authenticity, and a few parts of the kit (but not all of it) match Tonight Show videos from the time. One of the coolest features (besides this being a Buddy Rich kit) is the canister throne, which matches the drums and can store hardware. 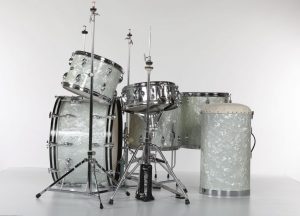 Need cymbals too? Donn also has a set of Buddy Rich’s cymbals, if you’ve got an additional $40k laying around.