When Green Day’s drummer John Kiffmeyer left the Bay area punk upstarts in 1990, remaining members Billie Joe Armstrong and Mike Dirnt could be forgiven for fearing the worst about the future of the band.

Fortunately, despite rumors of early difficulties incorporating a fresh-faced Tre Cool as Green Day’s drummer, it soon became clear that, in Cool’s own words, he was ‘the greatest Green Day drummer in the world’. 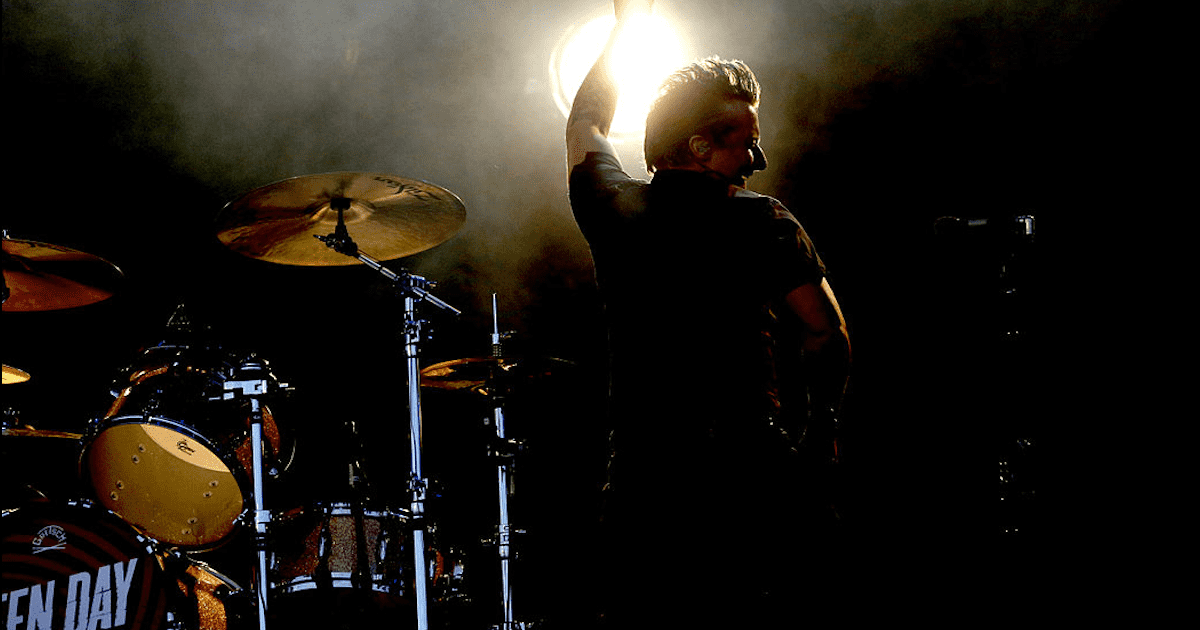 Having been raised in a Californian mountain community as Frank Edwin Wright III, he was given his now-famous moniker by the lead singer of the band The Lookouts, who recruited him to play drums for them when Cool was only 12 years old.

The man himself has talked about how his playing style changed dramatically when he became the drummer for Green Day:

“When I started, I had too many drums. I was a little reggae-happy and into fancier beats than was needed. It took me a while to get it: play the song, don’t play the instrument. I started figuring out how to make the band a stronger unit, to make it jump”

Green Day toured extensively during 1991 and 1992 in support of their first release with Tre Cool behind the drum kit, and although ‘Kerplunk!’ was very well received (and considered far superior to its predecessor), it wasn’t until the major label release ‘Dookie’ that Tre Cool, and Green Day as a unit, found not only their direction but monumental commercial success.

Tre Cool has added his instantly recognizable drum sound to every Green Day record since (including ‘American Idiot’, which has sold 16 million copies alone globally) as well as those from side projects Foxboro Hot Tubs and The Network.

His effervescent look and personality once prompted Modern Drummer magazine to describe Tre Cool as the world’s eternal punk rock poster boy, but for every ounce of style there is a ton of substance behind his drum work.

There are many facets to his playing that makes him not only remarkably distinctive within punk rock drumming, but also place him amongst the standard-bearers of the genre.

By listening to the two recorded versions of Green Day’s ‘Welcome to Paradise’ consecutively (first from ‘Kerplunk!’, and then from ‘Dookie’), you can witness the evolution of Tre Cool’s drum sound and playing style. The parts are very similar, but there is a warmth and fullness to the sound on the latter version that is less present on the original.

In particular, the ‘Dookie’ version’s bass drum is packing a punch which makes it much more prominent on the track. Of course, the budget and overall sonic ambition of ‘Dookie’ had an influence on this (compared to the DIY aesthetic on ‘Kerplunk!’) but unlike many other drummers, it didn’t water down Cool’s distinctive drumming style… in fact it enhanced it.

Those warm punchy tones, matched with a 90s take on traditional punk grooves, not only set Green Day apart from their contemporaries but also propelled to them to gain unprecedented commercial success.

The acceptance of the mainstream is a testament to Tre Cool’s ability to serve Green Day’s song properly.

Although many fans associate his drumming with gut-punching power, crash smashing, manic fills, and innovative tom beats, Tre Cool’s first instinct with Green Day is to play the appropriate drum parts in the correct places.

It comes across strongly in his composition, as he locks into Mike Dirnt’s driving bass lines allowing Billie Joe Armstrong’s melodies the space to dance on top.

Song parts are often distinguished by his consistent instrumentation of cymbals; Hi-hats for verses and ride cymbal or bell for choruses. Green Day’s ‘Dookie’ in particular reveals Tre Cool’s drumming taste when it comes to this area. You can take almost any track from the record to illustrate this point, but ‘Burnout’, ‘Having a Blast’ and ‘Chump’ are fine examples.

This style of drumming creates a familiar home base for Green Day’s sound, where Tre Cool never seems to overplay. In fact, by resisting the temptation to overplay, his bass drum and snare become extremely prominent, tight, and powerful. He creates a pocket that is unmistakably Tre Cool, saving flashes of color for just the right moments on the track.

Take album opener ‘Burnout’ as a stellar example. There is a subtle build taking place throughout this track that may go unnoticed by some listeners, and it elevates this beyond a standard 2-minute pop-punk piece.

The introduction of the turn-around fills in the second chorus hint to the listener that the track is evolving, and it leads into a bridge where Cool pounds on the bass drum while frantically adding crashes until the tension is finally released through a series of signature fills. This whole part only provides the satisfaction it does, due to the discipline shown by Tre Cool in the rest of the track.

This flurry of drum fills in Green Day’s ‘Burnout’ is one of many instances where Tre Cool lets go in a seemingly wild Animal-from-the-muppets style segment of a song.

One can assume that’s what he was going for when he wrote his drum part for ‘Basket Case’, which became one of Green Day’s biggest hits.

In arguably the best studio performance of his career, Cool peppers the track with rapid yet water-tight drum fills which despite their frequency, never come off as over-playing. It’s a great example of his understanding of when to let loose on the drums, and when to hold it together to make a song come to life.

His single strokes, triplet patterns, and flams are so well orchestrated and functional, that it has become impossible to imagine them not being there.

For another example of this, refer to the 9-minute punk ballad ‘Jesus of Suburbia’ from 2004’s ‘American Idiot’.

Exceptional playing is littered all over this track, and around the 90-second mark, consecutive and varied signature drum fills serve not only as an opportunity for Cool to flash his drummer chops, but also as a bridge between otherwise unrelated parts.

Crash cymbals too are a vital ingredient in Tre Cool’s sound. He uses them more than most drummers to add texture, aggression, brightness and warmth, highlight chord changes, and to induce momentum shifts.

This is so integral to his playing style, that the Green Day back catalog is quite frankly bursting with examples.

The chorus in ‘Longview’, the second verse and bridge in ‘She’, and the entirety of ‘86’ can be used to demonstrate the point (in particular, the live version of the latter on ‘The David Letterman Show’ is worth checking out for Cool’s thunderous performance alone).

When describing how he fell in love with drumming at a young age, Tre Cool said:

“Cymbals were really fascinating to me. I was an eleven-year-old rambunctious kid with ADHD. I thought cymbals were awesome. In one band practice, halfway through the first song, Larry Livermore, our guitarist in The Lookouts, said, “Whoa! Stop!” He takes all my cymbals away, including the hi-hat. He says, “Start by playing the drums. Once you get the drums down I’ll start giving you your cymbals back.”

This move by Livermore may have been the catalyst for Cool to think outside of standard punk rock grooves and be more creative with the drum set.

Despite previously identifying Tre Cool’s ‘Green Day formula’ for drums, there are a number of exceptions to this which point to Cool’s adaptability and creativity.

From ‘Dookie’, we should look no further than the iconic verses in ‘Longview’. This loopy tom beat compliments the subject matter of the lyrics beautifully: Melancholy in nature, accented by the wandering bassline, and only deviating to flick an open hi-hat or a bell to signal the beginning of a vocal part.

Indeed, there is no crash or snare drum present until the powerful single stroke fill flips the energy levels and the punk chorus (filled with angst) ensues.

Another common deviation from the classic Green Day drum sound that Tre Cool uses is to adapt marching snare chops in a punk rock context (something that punk contemporary Travis Barker also employs).

Examples of this can be found in ‘King For A Day’, ‘Homecoming’ and ‘Minority’. In all three songs, Cool demonstrates his tight rudimental chops which assist in conjuring up the appropriate militant and rebellious connotations which the lyrics address.

He shows not only his diverse taste and ability, but also his polished talents as a songwriter from behind the drum kit.

Tre Cool is a self-confessed drum geek. He has a huge collection of custom and retro kits, which he explained to Modern Drummer when quizzed on exactly how much gear he owns:

“I don’t know. Lots. Hundreds of snare drums, close to a hundred full kits, tons of cymbals—and I’m not being figurative. I’ve got every drumset that has been in a Green Day video or on a Green Day record.

I’ve got an original Gretsch Birdland kit from 1954 or 1956, the crown jewel of the drumset world. It’s green with gold hardware. And a Ringo Starr 1960s Ludwig black oyster kit. Tons of Gretsch, Slingerland, Ludwig, Leedy & Ludwig, and Pork Pie for good measure.

A clear Fibes acrylic kit, but the finish is like a shower door—pretty badass. A bunch of Vistalite—clear, candy-stripe. I’ve got a bunch of Noble & Cooley snares, including the Dookie snare, which I played on lots and lots of records. And tons of ’60s and ’70s Rogers kits. It’s a good time in the warehouse.” 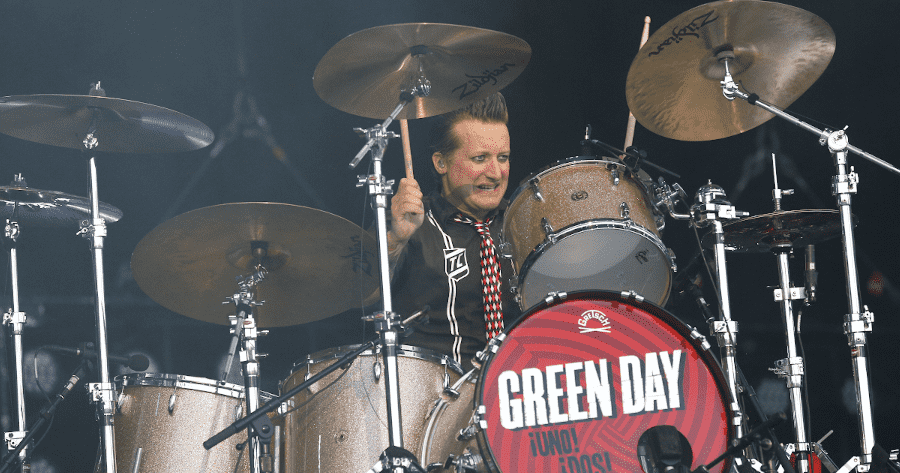 Clearly Tre Cool is a drummer who enjoys experimenting with equipment and trading things in and out of his set up.

He has even claimed that Green Day’s retro-garage side project ‘Foxboro Hot Tubs’ was conceived when jamming on one of his 60’s Rogers drum sets.

Over the years Tre Cool has endorsed many drum companies (such as DW and Gretsch), but these days he is very much a part of the SJC drum family, and his live set-up when drumming with Green Day is now always an SJC set.

Tre Cool’s cymbals are all Zildjian, including:

In recent years, it seems as if playing with two floor toms has become more and more popular. For Tre Cool, not only does it help provide his huge Green Day drum sound, but it’s as if he has built it around his cymbal set up.

By using two different and well-placed ride cymbals, he has easy access to a variety of sounds.

For instance, the tip of the stick is used to create the defined ‘ping’ commonly used in Green Day’s choruses, therefore the 22” Tre Cool Custom Ride is placed only a couple of inches above the first floor tom.

This leaves plenty of room in the upper echelons of his cymbal set-up for huge crash and ride cymbals, another trait synonymous with the modern punk icon.

In the studio with Green Day, Tre Cool has been known to mix up his drumheads regularly and experiment with the sounds each of them produce.

However, on tour things are a little different, as drumhead durability and consistency become far more important for performers. As Cool is an incredibly powerful player who is equipped with his thick 2B signature sticks, he tends to opt for coated tom and Powerstroke bass drum batters for drumheads as listed above.

It’s quite amazing that at almost 50 years old, Green Day’s Tre Cool is still considered a poster boy for young punk rockers around the world.

The way his colorful, larger-than-life personality is expressed through his well-refined DIY drum style creates an authenticity that millions of people around the world have connected to for 30 years.

As a result, he has become one of the best-paid drummers in the world, but as Tre Cool himself points out, it’s a personal contribution and legacy, rather than wealth, that still drives him:

“Almost every day someone I meet for the first time will say, “I began playing music because of your band.” That’s success for us.”