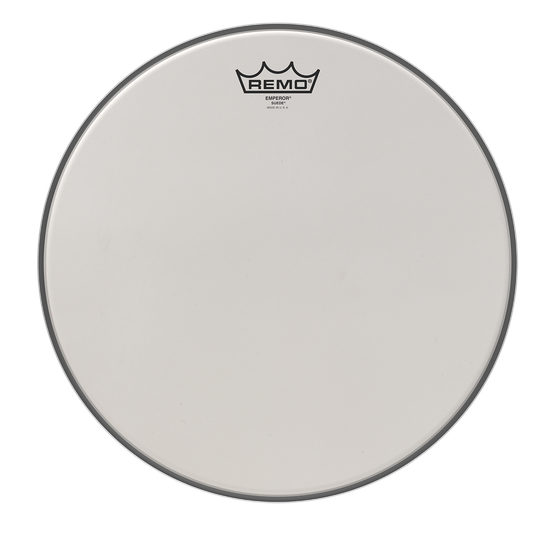 The Remo Emperor Coated is more subtle than the clear version, bringing added warmth and less attack, while still giving a nice sustain. These drumheads are excellent for studio recording and live playing.

The Coated Remo Emperor is made with two plies of 7mil film, with a coated top layer. There is no added control or dampening, which allows for a good amount of sustain. The coating gives a little extra definition to smaller accents and ghost notes, and this drumhead also allows for heavier hitting when required. The top coating is great with both drumsticks and brushes, providing a responsive surface for brush strokes.

Overall, the Remo Emperor Coated is well suited for medium to higher volume drumming. Sound-wise, the Coated Emperor has a moderate and slightly warm attack, with higher frequency tones reduced by the coating. The initial attack then gives way to balanced-warm tones, with a moderate sustain. Overtones are present but kept under control, thanks to the two 7mil plies and added coating. When hit around the edge, the Coated Remo Emperor still gives some colourful overtones.

The sound of the Remo Emperor Coated is great for medium volume styles of music, and also studio recording. The moderate sustain and slightly controlled overtones will come through well under studio microphones. This drumhead can also handle heavy hitting if things get loud. It should be noted however, in extremely high volume live situations, the warmer sound may get a little lost in the mix (especially without microphones on the drums). Tip: If you’re worried about this, take a look at the Clear Remo Emperor, which performs a little better in extremely loud environments.

If you’re looking for a versatile and durable drumhead, the Remo Emperor Coated is a great choice. This is a fairly open drumhead that keeps extreme overtones under control, while still allowing a nice sustain.

Remo Emperor coated drumheads have been used by countless drumming legends, including John Bonham, Travis Barker, Tre Cool, and too many others to name!