First up, what does DW stand for? DW stands for ‘Drum Workshop’ because that’s exactly what it was when it started.

It wasn’t long until he realized his overheads were eating into profits. For the business to survive he would need new revenue streams to subsidize the lessons. So, after brainstorming with one of his drum students (17-year-old John Good – now DW’s Vice President), Lombardi began selling books, sticks, and drums, and hired additional part-time teachers to take care of the educational load.

This allowed him to focus on the expansion of the company.

Lombardi hired his student Good as a part-time sales manager, and the two became incredibly enthusiastic about the development and innovation of drum products.

As a result of these regular brainstorms, the pair developed DW’s first original drum product – a height-adjustable trap-case seat. Following this successful innovation (a version of which is still being sold thirty years later) John Good started working full-time for Don, and they haven’t looked back since.

The trap-case seat had been a success, but they still didn’t have the capacity to move away from teaching and focus completely on drum manufacturing.

That was until 1977, when Camco Drum Co. (the main purchaser of the trap-seat) owner Tom Beckman made DW’s Don Lombardi an offer that would change the future for both himself and his company.

Lombardi agreed to purchase Camco’s manufacturing assets such as machinery, dies, and molds – pretty much everything except the brand name itself.

This gave DW the capacity to focus completely on product development and manufacturing, and move away from education. Don never had any doubts that the company would succeed as long as he could source the necessary funds, saying:

“The idea of failing never really occurred to me… Based on our mini-success with the seat, we had learned that if we could offer drummers products that would improve their drumming, we could be successful. Of course, having a desire to go into manufacturing and having the money to do so are two different things.”

Fortunately for Don, there were some outside investors, along with his parents, who were prepared to lend him the money to purchase Camco’s tooling.

As a result, DW’s next big product was a refined version of the Camco 5000 Nylon Strap bass drum pedal. DW’s version of the pedal was quieter, smoother, more consistent, and adjustable.

It quickly became the choice of drummers around the world, and after even further innovation – namely the chain and sprocket drive system developed in 1980 – DW was propelled to the summit of the drum pedal market. The creation of their DW5002 double bass pedal helped solidify this position. DW’s 5000 pedal would become a go-to workhorse pedal of the drumming world, and voted one of the best bass drum pedals in our own recent guide. Throughout the 1980’s they created even more innovative hardware, such as the rotating two-leg 5500T and the remote (cable) 5502LB hi-hat stands. Into the future, DW would continue with two-legged hi-hat stands, as well as a combined hi-hat stand plus slave bass drum pedal.

DW Drums: Learning on the Road

While Don Lombardi was in California working on DW pedals and hardware, John Good was out on the road building his drum knowledge as a technician.

He was working for some of the biggest acts of the 1980’s, including Earth Wind and Fire, Frank Zappa, and Madonna among many others. By setting up and tuning the drums to perfection every night, he not only developed an incredible understanding of how to make drums sound great, but also innovative ideas about how they could be even better:

“I found out that everything about a drum’s shell construction, shell size, bearing edges, heads, hardware and finishing individually and collectively affects the quality of a drum’s sound… Don and I began making a few sets a month, always concentrating on perfecting each one of these acoustically critical elements.”

Other than their unique and desirable innovations, a lot of DW’s early success can be credited to their excellent marketing strategies.

In the 1980’s they occupied a niche corner of the drumming market, focusing on top-quality drum pedals and hardware. The hardware was sold as ‘the drummer’s choice’ with a number of endorsements from some of the most famous drummers in the world.

The increased demand for hardware meant that they had to move to a new factory in Newbury Park, California in order to double their manufacturing capacity. As the decade rolled on, this success also transferred to their drum products too. Don explains, 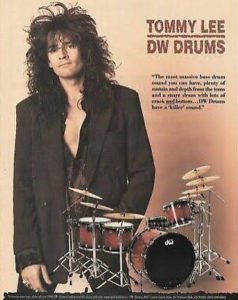 “One of the things that helped convince me that we might have a chance with the drums was when Tommy Lee (Motley Crue) came into the shop to have his pedals tuned up. While he was waiting, he sat down at the set of drums John had in his office. He started playing and wouldn’t stop; he was amazed at how the drums sounded. A light then went on in my head that Tommy Lee represented a generation of drummers who hadn’t experienced handcrafted drums.

“A short time later, Tommy bought a kit from us. That was March 7, 1989. I remember the date because it was such a big event that I made a photocopy of the check, which I still have to this day. He was endorsing another company at the time, but within a year, he became an official DW Drum endorser.”

DW Drums: NAMM Success and Beyond

The Tommy Lee endorsement aided in allowing DW to move beyond just pedals and hardware, and to be taken seriously as a drum manufacturer.

In 1990 they produced their first official catalogue of products which they took to that year’s NAMM show. They hoped that some of their pedal dealers would be interested in taking a drum kit each, but on the first day of the show they took orders for a whopping 60 drum kits. This was far more than expected, and the company spent the rest of the year catching up on orders before the next show.

The next ten years were an unprecedented decade of growth for the company, as they created and innovated on an incredible scale.

Since its debut at NAMM, DW’s drum hardware innovations include:

These drum hardware and drum kit innovations have been endorsed by everyone from technical masters like Marco Minnemann, Sheila E., Terry Bozzio, and the late great Neil Peart, as well as drummers for popular acts like Bruce Springsteen, Madonna, Incubus, Dixie Chicks, and Missy Elliot, many of whom play DW drums, pedals, and hardware exclusively.

Although Tommy Lee ended his association with DW in the 90’s, 2020 saw him return to the company. He stated,

“Welcome back?” “I never left. I just took a little journey trying some new things… I’m insanely excited about (DW) and the new gear. So stoked to share everything with ya!”

The turn of the millennium brought with it a new dimension to DW production – entry and mid-level gear.

Up to that point, the company had focused totally on high-end custom products and cutting-edge design. 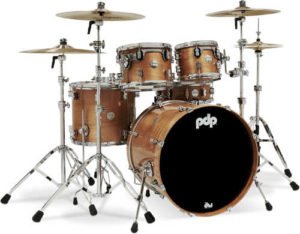 However, a move to a new factory meant they had the space to produce high-quality drums using computerized machinery. This new product line became known as Pacific Drums and Percussion, and since 2002 has been produced in a DW-run factory in Ensenada, Mexico.

The addition of a value-for-money drum set range did not end the DW team’s desire to push the limits of innovation at the top end of the market. These days, John Good searches the globe for different materials to build drums with. For example, DW’s “Timeless Timber” line features Lake Superior Maple (1997) and the 30th Anniversary Lake Superior Birch sets (2002). The drums were made from 500-year-old hardwood which sunk into the lake over 100 years ago. These logs were recovered by underwater divers to create highly unique (and highly expensive) DW drum kits.

DW’s 30th year in business wasn’t just a good one for wood however. It was also the year they launched some extremely technologically advanced pedals onto the market.

This began with a limited run of numbered collector’s edition Titanium 9000 single and double pedals, equipped with lightweight aluminum cam, titanium footboard, patented Delta hinge, and a certificate of authenticity.

The positive response to the Titanium 9000 bass drum pedals prompted a large-scale production version of the pedal. This development allowed for increased speed, power, and precision while reducing friction by using ball-bearings in the rotor. This pedal remains one of the standard-bearers in the industry to this day.

Although 2020 has been a tough year for most industries, it hasn’t slowed down DW’s drive for new ideas and products. 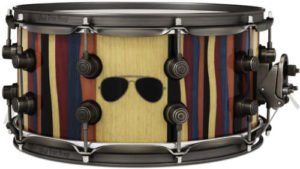 Good was also hard at work designing two meticulously-crafted new wood-inlayed snare drums in 2020. The ‘Timekeeper’ and ‘Jim Keltner Icon’ snare drums were created out of dyed, laser-cut exotic woods, which are then covered with custom artwork.

From a hardware standpoint, the industry-standard 5000 series has been bolstered even further. Specifically, there are two new 5500XF Extended Footboard hi-hat stands in two and three-leg models to match the latest 5000XF bass drum pedals. Additionally, there is also a new single tom/cymbal stand designed specifically for ‘over-the-bass drum’ kit setups.

In terms of accessories, DW also added two very useful clamps. The first is for the bass drum – called the ‘Claw Hook Clamp’, it’s ideal for attaching a splash cymbal – or as is becoming more and more popular – a stack. Tailor-made for single rack tom set-ups, it allows for additional percussion items to be placed tightly around the snare to aid with creative flow. The second clamp is designed for holding smartphones, meaning the days of having to find a place to balance your phone safely on your kit are gone. The DW phone holder also features a headphones holder, handy for recording sessions.

Finally, there has also been a re-think and re-engineering of the accessible 3000 series. With its functional design and supreme versatility, the upgraded line features sturdy medium-weight tubing, double-braced tripod legs, and numerous other pro-grade features.